On the morning of 11 November a group of about 20 gathered around the War Memorial in the foyer of Milford on Sea War Memorial Hospital for a brief ceremony of remembrance, conducted by Canon Ray Hubble, and wreath-laying. 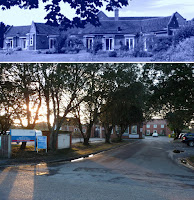 The ceremony takes place every year, however, in view of the current uncertainty about the future of Milford on Sea War Memorial Hospital, it remains unclear how this may continue in years to come.

Milford on Sea War Memorial Hospital was built thanks to generous donations from the local population and was opened on 7th May 1930 by Lady Powell. The hospital still serves as a war memorial to the 267 local men who served in the First World War, including 37 who lost their lives.