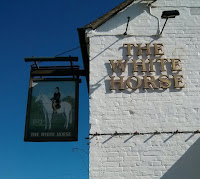 After a lot of effort, and significant investment (particularly in the childrens' play area), the doors of The White Horse again closed on Monday 9th January 2016.


After its previous closure on 7th September 2015, The White Horse had reopened with Julia, Liz and Steve (JLS Publicans) as the new landlords on the 2nd December 2015. Everyone hoped that with their track record in running pubs that they could make The White Horse successful once again.

The future of this historic village pub is again unclear at present, but The White Horse Inn, (and The Red Lion and The Gun) are pubs in the village that are Grade II listed buildings.

On the 25th January 2016 South Hants CAMRA (the local branch of the Campaign for Real Ale), successfully achieved an application to have The White Horse listed as an AVC (Asset of Community Value) for five year. This gives the building some protection from development and a breathing space for someone to make a go of running it as a going concern.

Behind the pub is copious land which if developed would be a prime location for housing.

The actual Building and business is owned by Enterprise Inns.