Milford on Sea: Hyphens or no hyphens? 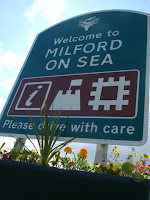 I woke up this morning thinking; 'Who can I annoy today'. Now, my wife had yet to have her second cup of tea, so it would have been unwise to even consider annoying her this early. A quick pop outside, but no one to be seen, so a change of plan was needed.
Luckily, there was a subject that had perplexed me for some time, so I decided now was the time for some research on whether Milford on Sea should have hyphens in or not. (We only deal with the big issues here you know.)
First point of call was the welcome signs into the village. No hyphens, so this must be right. To double check I took a look at the Parish Council website. The header had no hyphens, but the official address details did, so did a couple of mentions in the site’s text. So ‘1-1’ so far. 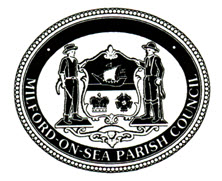 The Parish Council avenue of research has now opened another dilemma, as looking at the 'Village Crest' not only did it have hyphen's, but also two men in strange attire.  One seems to hold a sythe, the other wearing fisherman boots, - plus a ship, a crown and a flower shape. Could be interesting to understand the meaning, but my hyphen mission had to take priority and be completed.
Next, the Community Centre. No hyphens on their website, so ‘2-1’ to the ‘No Hyphens’.
The NHS site for the War Memorial Hospital had no hyphens, yet Hospital Friends website were clearly in the hyphen camp.
My next investigation should prove telling, so I tracked down the Milford Historical Records Society. Ah, they don’t have the ‘on-sea’ bit in their name. However, Milford-on-Sea does appear in their written text, so now ‘3-3'.
Hampshire County Council mentions our village by using both versions, so they have covered themselves well by ensuring they have the correct version somewhere. 4-4 now.
Time to hit the streets, and ask a few random people in the village. My first questionee said; ‘You can stick your hyphens where you like’.  I wasn’t entirely convinced he was commenting on my actual question.  The next just looked at me pitifully & enquired whether; ‘I didn’t have something more important to do’. This was not going well, however, it did make me think, and I concluded I hadn’t.
In my very weird world, I was convinced that people needed to know the result of my mission. I therefore decided to take a new tact by finding out a bit more about ‘hyphens in names’.

Not necessarily relevant, but I discovered that the longest hyphenated town name in the USA is Washington-on-the-Brazos in Texas. I considered contacting one of the inhabitants to see if they would comment on my quest, but I decided they might not have heard of Milford on Sea, and even if they had, I am not good with accents.
I also discovered that Sutton-under-Whitestoncliffe is situated in the North Yorkshire Moors, and claims to be the longest hyphenated place name in the UK. Again, I never called anyone there for the same geographic & accent reasons already mentioned.

Llanfairpwllgwyngyllgogerychwyrndrobwllllantysiliogogogoch is of course longer, but they missed the chance of this record by not adding any hyphens.

A quick look at Wikipedia, and although Milford on Sea village is mentioned, I am told never to believe anythings I read on that website, so that was disqualified. Ah, the encyclopedia. Oh no, haven't got one of those anymore.

I finally had a look at BBC News website, but there was no mention of Milford on Sea at all, so no help here then.
I then had a brainwave, when does the Oxford Dictionary believe it is correct to use a hyphen? I found they are not sure either. The first editors of the Concise Oxford Dictionary, wrote in their preface to the 1911 edition: ‘We have also to admit that after trying hard at an early stage to arrive at some principle that should teach us when to separate, when to hyphen, and when to unite the parts of compound words, we had to abandon the attempt as hopeless, and welter in the prevailing chaos.’, they conclude ‘Hyphenation in English is highly variable, and in many contexts, it really doesn't matter’.
My ‘in-depth’ research therefore left the results as an honourable draw with the ‘With Hyphens-4’ & ‘No Hyphens-4’. So, which is the correct way to write our village name: Milford on Sea or Milford-on-Sea? It seems there is no right answer, so just do what you like!
Thinking my mission was over, someone has just asked me which is correct, Danes Stream or Danestream? - Argggh!