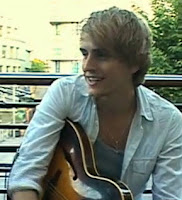 His new song ‘Blue Today’ is essentially a Blues number with Murray on his guitar, accompanied by bass & drums.

Murray’s musical style is a mix of soul, blues and reggae inspired songs, with a distinct vocal style that defies his appearance.  He has already supported names such as Amy Macdonald, Candi Staton, Natalie Imbruglia, Joe Purdy, and Sir Elton John, at his only UK concert in 2010.  The concert was performed to a sellout crowd at Watford FC’s Vicarage Road Stadium.

Alongside producer Dan Grech Marguerat, James is now working on his debut album with which is due out at the end of this year.