As the village paid respect on Armistice Day at the 11th hour of the 11th day of the 11th month, the atmosphere was captured in the image below by Kerry, a local resident.
The two minutes silence was perfectly observed, and socially distanced, at the ceremony led by representatives of the Milford on Sea branch of the Royal British Legion.
It is a pleasure to see that Lockdown did not prevent Milford on Sea people marking the event.
As they say, a picture paints a thousand words.
On Remembrance Day a 'virtual' Reflection & Remembrance service was held involving the Milford on Sea Churches and Scouts.
The event was organised by Chris Hobby, a sixth-generation villager and member of the village's branch of the Royal British Legion whose grandfather died in the First World War.
To find out more please click here. 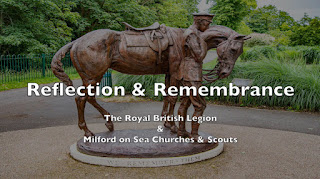