Do you know what the images represent on the Milford on Sea Village Crest?
Well, the article below was published in July 2014 and we thought you might like to see it again: 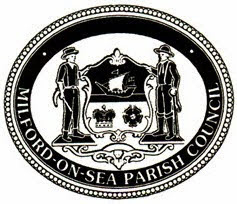 No doubt someone from the Milford on Sea Historical Society can enlighten us, and perhaps even throw light on the crest's origin.
When faced with a question like this is, my approach is to make up the most inappropriate answer, and then wait for a grown up to provide the real facts.
So, here goes:
The Milford on Sea Crest contains two men standing on a set of scales representing how people in the village are quite good at balancing. The first man holds a sythe representing a rice worker from the paddy fields around Sturt Pont, the second man is a tall boy scout, his wellington boots and fishing net in hand illustrate how they used to wade into the sea to catch shrimps. Both men following the village tradition of wearing trousers a size too large, hence the need for both a belt and braces.
The crest itself is headed by a Keyhaven longboat, reminding us of our shipbuilding heritage and of the time when our forefathers set sail to conqueror the Isle of Wight. The Crown provides a memory of the former name of the village pub now known as The Smugglers Inn, and finally the red rose of Lancashire represents all that have settled in the village from the North of England.
It is possible that all of these facts may be not be completely accurate, so if you can throw any light on any inaccuracies, please get in touch.
Following publishing the article above, regarding the Milford on Sea Village Crest, we had an interesting reply from Bob Braid of the Milford on Sea Historical Record Society:
Bob, who is blighted with a similar sense of humour to my own, speculated with wry smile; "The bloke on the left actually has a pickaxe & represents the men who dug the network of smugglers tunnels around the village. The ship is a poor representation of a Viking long ship and refers to the great battle between the Saxons and Danes when the stream ran red with blood and from which Danestream gets its name. The crown refers to Charles 1 imprisonment at Hurst Castle on passage to his trial and execution in London. The flower is not a rose, but the elusive Milford Pimpernel, also known as Paddy's Pride, which used to grow on the cliffs, hence Paddy's Gap." Mixing a few facts with some myths is a great way to create history!
Fortunately, he also has a more factual story. Bob explained that the Milford on Sea Village Crest first appeared on souvenir china in the late 19th and early 20th centuries. During those times, souvenir china was all the rage and it is extremely collectable today.
Bob said; "The first pieces were sold in Mrs Christie's shop and then soon taken up by other village shops. (Christie's was firstly located opposite where Verveine now is, and later where New Seasons Florists are and next to the old Post Office)
Bob continued; "As far as we know, and we are willing to be convinced otherwise, you could select your design from elements in a pattern book and we think it was dreamt up by Telford Stone, the printer and stationer in the village."
Interestingly, the Truro coat of arms has a remarkable resemblance to our own, which makes this final explanation all the more likely. 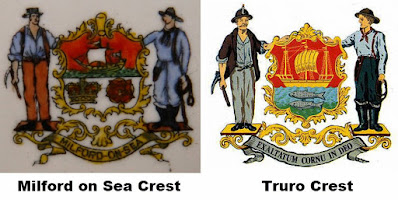