Roger Davison lives in Milford on Sea and is a very good amateur cook. Seven years ago he was looking for a means of cooking chicken in a better way, and finding nothing on the market decided to invent his own system. The result was the COQOPAN® a new and fully patented method of cooking chicken in half the normal time by steaming the bird from the inside whilst roasting it on the outside all at the same time. 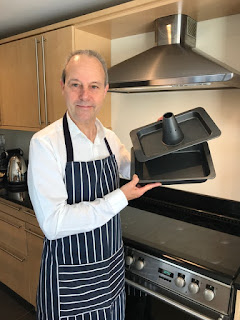 After years of design, prototypes and testing he finally developed a successful working model which he presented on the Channel Four television programme “Buy it Now for Christmas in October 2019”. On the show were buyers from Amazon, Lakeland and JML who after his demonstration all gave the product the thumbs up and placed orders on, the spot. Roger came away from the show with orders valued at £50,000.
Since then things have gone from strength to strength with the COQOPAN®, largely through Amazon, is now selling not only in the UK but throughout Europe and The Coqopan® Company is now featured on YouTube, Facebook, Pinterest, Twitter and LinkedIn.
And what of Roger himself? Well he is not an engineer but a professional musician, who plays in theatre orchestras in London and but for Covid-19 would be the leading keyboard player for Mary Poppins at the Prince Edward Theatre in London.
Check out the Coqopan on Amazon, currently under £15. click here.