Milford Conservation Volunteers are honoured to announce that they have been awarded the Queen’s Award for Voluntary Service. This is the highest award a voluntary group can receive in the UK and is equivalent to an MBE. 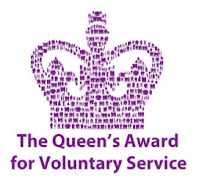 Representatives from the group will be attending a garden party at Buckingham Palace in May 2021 along with other recipients of this year’s award.
The Queen’s Award for Voluntary Service aims to recognise outstanding work by volunteer groups to benefit their local communities. It was created in 2002 to celebrate the Queen’s Golden Jubilee. Winners are announced each year on the 2nd June.
Representatives from Milford Conservation Volunteers will receive the award from Nigel Atkinson Esq. Lord-Lieutenant of Hampshire later this summer. The Lord-Lieutenant is appointed by HM The Queen as her personal representative in Hampshire.
This award is an incredible recognition of the huge amount of work gone into the group by all members past and present, and all are humbled by the nomination and look forward to the recognition which it brings.
This is a very proud day for a worthy voluntary group in Milford on Sea, it is a pleasure to see their effort rewarded and we send our hearty congratulations.

David Horne, Chairman of Milford Conservation Volunteers said:
"Our MCV volunteers are incredibly pleased to have been recognised at such a prestigious level and to receive this delightful accolade from HM the Queen. It is in recognition of the unstinting efforts of our members over many years to inform and motivate the local community in actively protecting and enhancing the wonderful and varied habitats and recording the bountiful wildlife species that currently thrive in our immediate locality. Equally important to our active work parties have been our representation and influence when working hand in hand with other similar minded organisations and local government bodies”.
“Through our efforts we have not only offered protection to the local wild-life habitats but made a hugely positive impact on people’s lives, both young and old in appreciating nature. This is particularly important in these unprecedented times when temporarily restricted to our gardens or immediate surroundings. Thank you to everyone who has helped along the way”.
Keith Metcalf , MCV Conservation Officer also commented;
"It is a great honour to have been recognised for the voluntary conservation work we do for our local community. Our members (past and present) will be lifted by this announcement following the last three terribly difficult months for so many families across the country”.
“In accepting this award, we remember to include our gratitude to our founder members that had the vision and drive to form the earlier groups from which MCV was subsequently formed. Firstly, to the Milford Environment Group that was established in the early 1990’s following the 1987 hurricane that devastated Sharvells Copse. In particular, we thank the enthusiasm of MEG’s first Chairperson, Sandra Ebbetts and the late Phil Gossling (their second Chairman) and of course the first committee members, Heather Allery, Julia Poole, Rosemary Crumby, Peggy Statton-Bevan, Ernie Goldsworthy and the late Bill Smith”.
“We also pay tribute to the founder members of the Wildlife Recording Group, including Anne Jenks, who was the last person to chair MEG and also a founder member and first person to chair the WRG and the MCV when it was formed in January 2012. Tony Locke was also a founder member of the WRG and retired as Chairman of MCV at the start of 2020”.
“We are equally grateful to the Parish Council for having the confidence to allow MCV to undertake our conservation work in Milford’s nature reserves and public open spaces. We acknowledge the help given to us over many years by Hampshire Conservation Volunteer’s and especially to Trustee, Hugh Corry. We thank the New Forest Area Conservation Volunteers and the National Park’s Land Advice Service team who have all worked tirelessly to ensure that our local wildlife and the habitats in which they live, are well cared for and help make them resilient to whatever the future change in climate throws our way. We share this award with each of them”.