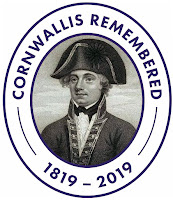 Milford-on-Sea Historical Record Society and The 1805 Club (which was founded in 1990 to preserve and care for the memorials and graves of those associated with the sailing navy of the Georgian era) are holding a number of important events in July 2019 to commemorate the 200th Anniversary of the Death of Admiral Cornwallis (who had lived at Newlands Manor, Milford on Sea).

Naval Heroes being celebrated:
All Saints' Church Service conducted by the Bishop of Basingstoke with Senior representatives from Hampshire, the Royal Navy and naval historical research attending. Day will also feature:
Village Celebration of the Cornwallis Story on the Village Green with a host of attractions and activities, including the two horse post-chaise with riders in full costume

Command of the Seas! Exhibition at St Barbe Museum and Art Gallery, Lymington

A Brief Background: The 5th July 2019 marks the bi-centenary of the death of Admiral the Hon Sir William Cornwallis, one of England’s most renowned admirals. He settled in Milford in 1800 shortly before being appointed Commander in Chief of the Channel Fleet in 1801 and from 1803-1806. It was during this period that Napoleon planned, and came close to executing, an invasion of England. Cornwallis displayed courage, perseverance, determination and leadership through his blockade of the French fleet at Brest and other ports which frustrated Napoleon’s plans to invade England. This action, in the face of major logistical and strategic difficulties and through two winters of unusually severe weather even for the seas off the coasts of Brittany, secured his reputation as one of the greatest admirals of the Royal Navy, respected by his fellow officers, loved by his men, and revered by Nelson. The achievement of preventing a major invasion stands alongside the defeat of the Spanish Armada in 1588 and the Battle of Britain in 1940 in the annals of this country.

Admiral Cornwallis & Captain Whitby & Nelson: Admiral Cornwallis acquired the Newlands estate in Milford by lease in 1800 and later purchased the property. He was a close friend of Lord Nelson, a life-long bachelor and formed a great friendship with John Whitby who was his Flag Captain and whom he regarded as a son. After the Battle of Trafalgar and the death of Lord Nelson, it was naval Captain Whitby who broke the news to Nelson’s mistress, Lady Hamilton.

Cornwallis’ Grave and The Three Admirals: In recent years the location of Cornwallis’ grave in the churchyard of All Saints, Milford has been unknown. Cornwallis asked to be buried in an unmarked grave next to his good friend Captain John Whitby. This request was adhered to by Mrs Whitby, but her daughter, Mrs Theresa West, erected a very fine monument in the church, the old gravestone was abandoned, and all memory of it was lost.

In 2014 Cornwallis’ grave was discovered but was in poor repair. The Whitby/Cornwallis ledger was conserved to prevent any further deterioration. It was decided to renovate the ledger together with the memorial in the church to a second naval officer who served with distinction in the French Revolutionary and Napoleonic Wars, Rear Admiral John Peyton has been restored. A third senior naval officer and friend of Cornwallis, Admiral Robert Man, is also buried at All Saints, Milford.

A series of events have been planned by Milford-on-Sea Historical Record Society and The 1805 Club with the active support of the New Forest National Park Authority and St Barbe Museum and Art Gallery. Support has also been received from the National Lottery Heritage Fund, Hampshire Archive Trust, the Hampshire Field Club, local authorities and other local history societies.

Church Service, Memorial & Stained-Glass Window: A church service will be held on Friday 5th July 2019 conducted by the Bishop of Basingstoke, and senior representatives from Hampshire, the Royal Navy and naval historical research will be attending. The Cornwallis grave and memorial will be rededicated and a new stained-glass window commemorating all three admirals will be blessed.

News of Trafalgar by Post-Chaise: The two horse post-chaise with riders in full costume will visit the village school and then proceed to the church service which will be followed by a recreation of the arrival of the news of Nelson’s death and victory at Trafalgar by post-chaise.

Village Green Celebration & Post-Chaise: The two horse post-chaise will then move to the village green on Friday 5th July 2019 around 3pm until 5pm where there will be a variety of themed entertainment, live music, Royal Navy and Trafalgar Way stands and refreshments provided by local village groups including the Primary School and Royal Navy Catering.

Command of the Seas! Exhibition: A twelve-week exhibition entitled, “Command of the Seas! The Navy and the New Forest against Napoleon”, will run at St Barbe Museum and Art Gallery, Lymington from the 8th June until the end of August. Also, Milford-on-Sea Historical Record Society has published a commemorative Bicentenary Edition of its Occasional Magazine with articles on Cornwallis, Man and Peyton.

Royal Navy Vessel in Lymington Port: It is hoped to have a Royal Navy training boat of the P2000 Archer Class in Lymington port over the week-end of 5th to 7th July. (Subject to operational duties)

The Admirals’ Trail &
School Workshops: Further outreach activities for the community include, as a lasting resource, a heritage trail from Hurst Castle through Milford and surrounding towns and villages on to Bucklers Hard and Calshot Castle. This is being prepared in conjunction with other parishes and local history societies. In addition, The 1805 Club will be running its Wooden World educational workshops at Milford-on-Sea Primary School in July.