All Change at South Lawn

Tim Wedgwood & Nikki Rowe are delighted to be the new independent owners at South Lawn Hotel, and they come with an excellent pedigree and exciting plans for the hotel and restaurant.

They have already commenced the refurbishment of the restaurant which will be renamed and is due to open in early December. Bedroom and bathrooms refurbishment has also started on a rolling basis and improvements to the public areas are ongoing. The car park is also being stripped and re-graded soon, as Nikki & Tim quite rightly take great pride in the outside areas as much as the inside. 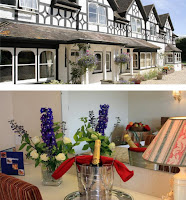 The Cedar Tree, as the new restaurant is to be called, will be hosted by Nikki & Tim and the kitchen will be headed up by Gavin Levens who has worked closely with the new owners at East Close Country House Hotel.

Gavin has nurtured a brigade over the summer at East Close in preparation for their arrival at South Lawn and he is very proud of the quality of food he produces. The prices are planned to be reasonable, for example the traditional Sunday lunch will cost £16.50 for two courses. The Cedar Tree will be open for Sunday lunch from 12.30pm to 8pm. Throughout the week and on Saturdays they will be open from 7.30am serving Breakfast, Morning Coffee, Lunch, Afternoon Tea and Dinner with last orders at 9pm. the menus will see some classic dishes as well as a grill section that will include speciality burgers and local meats. They will always have fresh fish on the menu and Gavin’s team turn out some amazing and innovative desserts.

Tim was kind enough to provide a fascinating insight into his and Nikki's background before arriving at South Lawns - Tim says: "I am delighted to have acquired South Lawn, I have been trying to buy a hotel in the area for some time and have had several attempts at purchasing South Lawn but timings were never quite right and on two occasions I had my offer rejected as the vendors favoured other parties.

Serendipity eventually, I received a call from the agents in April this year informing me that the purchase had been aborted by the previous purchaser. As luck would have it I had just sold my hotel in the Midlands and was in funds so I without hesitation resubmitted an acceptable offer. It took some 6 months to complete but it was worth persevering.

I would describe myself as a single hotel hotelier but in recent years it has been my pleasure to have had an addition to my portfolio. In November 2012 I took on the East Close Hotel and Conqueror Inn at Hinton. This gave me a flavour for the area and hence my decision to sell in the Midlands with a view to concentrating my efforts in this lovely part of the country.

My career from the age of 16 when school left me has always been in the hospitality industry, my first job as a kitchen porter put me in good stead to climb the ladder, I have worked in every department of a hotel and my employed career peaked when I spent 5 years at London's prestigious Grosvenor House on Park Lane. Four years as Banqueting manager organising events such as the Bafta Awards, Annual Dinners and Society Weddings. I also spent a year as guest relations manager and I enjoyed working with royalty and government officials in this high profile position.

In 1995 at 26 years of age I bought my first hotel and have since owned and managed six hotels. As an owner operator myself and my partner Nikki are fully committed to putting South Lawn back on the map. Both Nikki and I will be resident at the hotel and are embracing the challenge we have, Nikki and I have worked together in hotels for 18 years and we are a great team.

As a banqueting manager by profession the superb function facilities at South Lawn will be high on the agenda, we look forward to looking after local society events and have already had the pleasure of serving a number of local organisations. Food quality and service in banqueting is so important, we know what to do and we look forward to many years of looking after our guests.

Both Nikki and I sincerely hope we have the pleasure of looking after you."

It is great to see this motivated team taking over at South Lawn and bringing it into the 21st century, - and we hope that their changes will very soon be experienced by all of us.

The Cedar Tree will be another exciting addition to the Milford on Sea culinary scene - and a further endorsement that Milford on Sea is a Foodie Heaven by the Sea!