Word has reached us that there was a rather strange way for a group of local revellers to celebrate the night of New Years Eve, when a game of naked rugby took place on Milford on Sea village green at around 3am in the morning.

It is understood that this is not a regular fixture, and it was difficult to know who was on which team due to the lack of any clothing. It is thought that around 8 players took part and they were all of an age that should know better! 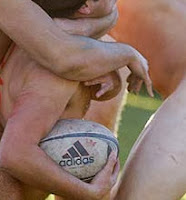 It is unclear whether they started with any kits, or whether all of their clothes simply fell off simultaneously!

The wet and cold weather meant the match did not last the full game time, and that ample amounts of mud covered the modesty of some.

Thankfully, there were no obvious injuries, but no doubt there would have been suffering the following day, not just from the exertion of the game, but also as a result of the night's celebrations.

Fortunately for us, there are no pictures that we know of. If anyone has any, whatever you do please don't send them in, just delete them from your camera!

Whilst there is a wide variety of clubs in Milford on Sea, we are unable to help anyone who may wish to get involved in any future games, as we do not believe there is a formal Naked Rugby Club to join in the village.

The full list of the night's players is unknown to us, but they know who they are!

PS: The New Milton Advertiser & Lymington Times heard about the story here, and yesterday it was published on the front cover of the 10th January edition of the newspaper for all to see. I bet there are some embarrassed lads around Milford right now!