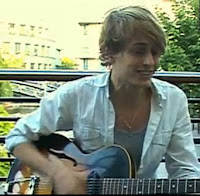 We may be on the verge of having a real life pop star in the village.  Milford on Sea born Murray James has his first single due for release on 9th October.

Murray draws on soul, reggae and hip hop influences and combines them with his unique lyrical insight.  Writing his own material, he is also currently working with Producer Dan Grech Marguerat (The Vaccines, Scissor Sisters), on his debut album for the iconic Deconstruction label.

You can watch Murray’s new single ‘Protect Me’, by just clicking here:
www.youtube.com/watch?v=vWUHsEbSPYk

You can also hear a preview or pre-order Murray’s Debut 4-track EP 'Protect Me' here: http://bit.ly/qZpadw
-------------------------------------------------------------------------------------
Milford on Sea born Murray James was nominated for a Q Award as the ‘Next Best Thing’ in 2010, and also dubbed ‘a superstar’ by The Sun.   Murray James is actually a ‘stage name’ & he may be known better locally by his real name of James Billet. Now pursuing a career as a singer songwriter, Murray has signed a recording contract & he is in the process of writing his debut album between the UK and the USA.  Murray’s musical style is a mix of soul, blues and reggae inspired songs, with a distinct vocal style that defies his appearance.  He has already supported names such as Amy Macdonald, Candi Staton, Natalie Imbruglia, Joe Purdy, and Sir Elton John, at his only UK concert this year.  The concert was performed to a sell-out crowd at Watford FC’s Vicarage Road Stadium in May 2010.
The 21st anniversary of the star-studded Q Awards were held at The Grosvenor House Hotel in London on Monday, 25th October 2010.  Some artists who received awards on the night included Sir Paul McCartney, Take That, Florence Welch, Chemical Brothers, Bryan Ferry & Kasabian.  So it looks like he is moving in the right company!  Murray was nominated in the shortlist for the ‘Next Big Thing award'.  The shortlist was chosen by a panel comprised of Columnist Of The Year Caitlin Moran from The Times, Radio1's new music guru Huw Stephens, The Sun's Showbiz Editor Gordon Smart and Q Editor In Chief Paul Rees.  From a long list of 20 acts the panel shortlisted the list to six acts.  Sadly, it wasn’t Murray’s night to pick up an award, but it sounds like he had a good time anyway according to the message he put on Twitter; “That was an unbelievable night... I'm so hung-over that I can barely move my arms! Russian vodka gets a big thumbs up!”  We hope that this is the start of a great musical career for one of our very own.