A lunchtime surprise at Zaika 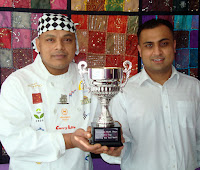 Anyone who reads the nonsense I report on these pages will be well aware that I am partial to a great curry. Fortunately, I know a lot of you are as well.

As part of my research for the Milford on Sea Food Week I decided that it would be good to get a picture, and a bit of background on all of the chefs, or owners of the eateries in the village. To find out about the chef at Zaika I called Kalam & arranged an appointment to call.

On arriving I had no idea that I was about to enter my own personal heaven. I soon met Souel Bodrul, who I was to discover was trained at the Dhaka Sheraton Hotel in his home country of Bangladesh, and that in the UK, Souel has been a specialist tandoori chef at the Bombay Brassiere, & Chutney Mary in London. He now loves creating unique dishes at our own local Zaika restaurant. After taking some photos to accompany the pen pictures on the website, Kalam asked if I would like to see the dishes from the new menu he will be launching in a couple of weeks. Would I?!!

In no time the kitchen was in full flow & one incredible dish followed another, & each was art on a plate. You of course know what I was now thinking. Four exquisite dishes on the table that had only been touched by the flash from my camera, - they looked lovely, but very lonely! Right on cue, Kalam asked if I would like to taste them. Now, my desired answer was of course a foregone conclusion, but like most things in my life, situations are not simple.

To explain, just before coming to Zaika my wife had said ‘don’t be too long, I am doing tomato soup with homemade bread for lunch’. You can see my dilemma, I was now faced with the wrath of my wife, or a fantastic meal.

I decided that I have survived most misdemeanours in the past, all that I needed was a good story for getting home late. Again looking at the table ladened with glorious food, I decided my excuse would wait.

So, not wanting to eat alone I said to Kalam, ‘only if you join me’. I know, a risky strategy, but luckily it worked. Kalam & I then sat down & tucked our way through a new starter of Kurkure Stuffed Mushrooms, a breadcrumb coated ball containing mushroom, potato, sweetcorn & cottage cheese, served on a bed of vegetable curry. Then we tucked into the first new main course, which was a Cinnamon Tossed Grilled Chicken Breast, made with free range corn fed chicken stuffed with spinach & flavoured with spices & garlic, served on a sweet & sour sweet corn sauce, still going, we then had Chicken Chameli, tandoori free range corn fed chicken breasts stuffed with spiced peas & carrots, served on a black lentil & homemade mango sauce. Finally we reached the Dipped Chocolate Strawberries & mango pulp! As we ate, Souel & his team watched us intently, & we could see their satisfied smiles as we savoured each different taste.

Hard to believe that things could get even better, but Kalam then told me the dishes will be on his menu in a couple of weeks, & that they were starting an ‘All You Can Eat Sunday Buffet’ at the same time. I just love living in Milford on Sea!

On leaving, and having said my thanks, I remembered I had to explain why I had been out for two hours. So walking back I bought some mints, & then rolled in the muddy grass by the Danes Stream.

As I arrived home there was no welcoming kiss for me, just a slightly uncomfortable feeling, as my wife look up & down at my muddy clothes. Things were not going so well now. I endeavoured to explain how I had been mugged in Sea Road by a gang of four old ladies on motorised scooters, but she was having none of it. Worse still, she recalled the time I had been mugged by a gang of particularly large girl guides, & a few months later by a troup of vertically challenged guys from the local circus. It then occurred to me that it was probably time that I now thought of a more creative line of excuses.

Looks like I will be getting my own tea tonight, but I’m a bit nervous to ask if there is any tomato soup left.