A Family Story for Remembrance Day 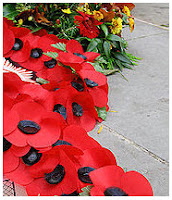 I am sure that at this time of year many families recall stories of the war years & the part their own families played in the eventual victory.

Our family never really had any ‘war stories’, well we didn’t until my brother Peter, did some genealogical research during 2009. Like most families I guess, the war was not discussed when we were children, & the only thing I remember was that my dad’s brother had been a WW2 prisoner of war in an horrific Japanese camp, but he never spoke about it to anyone, ever.

I also knew that my Grandad’s lungs were badly damaged during the first world war, but did not know how. I remember him as a warm & kindly man who lived with us when we were children. In fact our three bedroom home in Kingsbury, North London, housed Grandad (Horace Hunt), my Nan, Mum & Dad, plus us three kids. He fondly told me great children’s stories as I sat on his knee, with his oxygen cylinder & mask sitting ominously next to him in the living room. He even caught me doing something I shouldn’t have, but kept it a secret from anyone forever.

My other Grandfather, Albert Long was born and bred in Hendon, North London. I remember him as a stern archetypal Victorian man, in a woollen suit with waistcoat & fob watch. His house was a standard semi-detached in Hendon, North London with an allotment at the bottom of the garden where he spent many hours. He was certainly of a mind that ‘children should be seen & not heard’ & the front parlour was a special treat to visit only on special Sundays. This all seems so far from the days we now live in. Having been born in the mid 1950's, I grew up with the war as being something 'old people' talked about, & in my teens & twenties I was much more interested in girls & pubs!

Sadly, when I eventually became interested in what happened during the two World Wars it was too late to ask many of those I had known that had been there. It was not until I was in my early forties that I took a trip to Ypres & the Belgian World War One battlefields & trenches, and the experience was unexpectedly emotional & a disturbing realisation of the scale of the slaughter. In subsequent years my interest in the war years grew, as I tried to understand & make sense of what had happened. It just felt important to know.

A visit to the World War Two D-Day Beaches of France soon followed. If these are trips you have never made, I thoroughly recommend a visit. I cannot say it will be fun, I also cannot guarantee you will not have an involuntary tear or two, but I can guarantee that the sights will put everything into perspective & steel your resolve for such a thing to never happen again. In my view, it should be on the curriculum of every school in the country to visit the battlefields & cemeteries to ensure our children never forget what happened to their own forefathers.

Back to Peter, (my Brother), a few years ago gave me a surprise present of two photograph frames with the most amazing contents following his research: each had a sepia photograph, name & rank panel, miniature medals & script on the back. The photographs were pictures of each of my Grandfathers in their military uniforms during WW1. The stories on the back revealed amazing things about two ordinary men during wartime.


My Grandad, Staff Sergeant Horace W Hunt had been in the Royal Army Ordnance Corps during WW1 as a Mine Sweeper, unfortunately he was involved in an explosion which necessitated his return to Hendon Cottage Hospital, England for treatment for temporary blindness & respiratory problems. During World War Two he served as a corporal in the Southgate Home Guard.

Being an engineer he invented an new loading device for 97 round Lewis Light Machine Gun which improved the loading efficiency by forty percent, which he donated to the war effort. Our family now has a letter from a Major M. A Moir, congratulating him on his ingenuity.

My other Grandfather, Rifleman Albert Long, of the Rifle Brigade (Now merged into the Royal Green Jackets) was one of the few to return from the atrocious battlefields of Passchendaele, Belgium. During his time in the trenches we were proud to discover that he had been awarded the Military Medal for an individual act of bravery. His Military Medal was awarded on the 18th October 1917.

Unfortunately, all records of the exact event were destroyed during the bombing of the Army Records Office in London during World War 2. However, from family memory Peter discovered that he had saved a comrade from ‘no man’s land’ during battle. His medals were bequeathed by the family to his Regimental museum, the Royal Green Jackets Museum in Winchester when he died in 1965 & can still be seen there today.

This personal story may not be read by many, but for those that do read this, I hope it conjures up memories from your own families. Most importantly, now that I have written this story online my Grandfathers will never be forgotten, & like so many other fathers & Grandfathers who sacrificed so much, they never should.