Stormy scenes were witnessed as protesters from Milford on Sea made their views known at a recent Hampshire County Council Planning Meeting.

The meeting chairman, Councillor Dupp, only managed to restore order with the threat of calling the police.

After a five year consultation process the proposals for Hurst Bridge were presented for decision by the council. 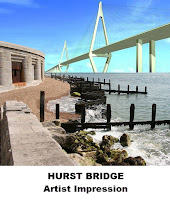 Protesters tried to make the point that the Milford on Sea community had not been directly consulted and objected that all meetings had taken place in Winchester. These arguments fell on deaf ears.

Hurst Bridge is planned to run from a new bridgehead to be constructed next to Hurst Castle across to Totland Bay on the Isle of Wight.

Councillor Dupp made the point that the new bridge is key to the regeneration of the Isle of Wight and will increase tourism trade for the island. He also said; "Hurst Castle have a great opportunity to expand their café offering to travellers wishing to rest before crossing the bridge."

Plans were then revealed to create a suitable access road, the Village Green would be narrowed in order to widen Church Hill. Shouts erupted from the viewing gallery as protesters heckled, banged their walking sticks and threw various objects and unidentified liquids into the council chamber. As police dragged away the final protester, the livid Milfordian made it clear where the council could stick their bridge.

Eventually order was restored. Councillor Dupp, in a slightly agitated state, reopened the meeting by saying; "Some people simply do not appreciate what we do for them. Those people from Milford on Sea are always trouble. Why is it that so many retired people have nothing better to do that get in the way of our great ideas."

Councillor Hugh Jass apologised for Councillor Wyn Dupp's ageist outburst, and went on to say; "We also wish to make it easier for people from Milford on Sea to reach the island, and saver cards will be made available to all residents which will offers discounts for journeys made on foot or disability scooter."

The chairman then asked the council to vote on the Hurst Bridge proposal. The proposal was approved by a majority of 11 to 1 with the construction of Hurst Bridge to commence on the first day of April 2018.

Local residents are now planning a sit-in protest and barricades on Church Hill the moment the roadwork team arrives. To draw further attention to the village's plight, their are plans to have 24 hour sessions of interpretive dance and Gregorian chanting on Milford on Sea Village Green.

If you wish to make your feelings known, please contact:
u.beenhad@hampshirecc.gov

*Due to the serious nature of this Hurst Bridge decision, please share this story with your friends in Milford on Sea, we must stand united!