From Slaughter House to Biscuit House

If you visit Milford on Sea High Street it has been hard to miss the transformation that has been taking place to what had previously been a village landmark for many years, Gwen's Fashions at the foot of the village green. 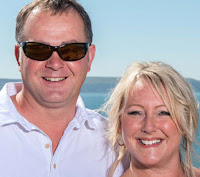 When the business opens we will of course let you know, but in the meantime Glenn has shared some fascinating history on the building, which we hope you will find of interest.

Info from Gwen & Eddie Peden and the old deeds on 62-64 High Street.

The land had numerous owners throughout the 1700's and 1800's until Saturday 8th November 1884 when, at an auction at the Angel Hotel in Lymington, at 3pm, it was sold as a long leasehold business premises.

“Held for the remainder of a term of 1,000 years lease from 28th July in the 28th year of the reign of his majesty King Charles II, at a yearly rent of a peppercorn”.

In 1889 George Miles bought 64 High Street with the butcher shop and slaughter house and named the business 'G. Miles'. The property stayed in the family until 1945.

During the 1930/40's a great village character, Mr Ackers, better known as 'Rodeo', lived in an one room stone cottage at the rear of G.Miles butchers shop. It was said that he had once worked in a circus and he was always seen in the company of animals, mainly dogs. He also kept goats and some other animals on some spare ground near the White Bridge and his animals were often decorated with coloured ribbons. 'Rodeo' became an accepted part of Village life and well thought of by locals and visitors alike. One day 'Rodeo' was out, and when he returned home the owner of the day had demolished his home. It is understood that he then taken in by a care home.

The 'village slaughter-man' was one Dick Dunford. Not only was he responsible for the disposal of a lot of the animals in the two slaughter-houses in the High Street. As many of the working families kept pigs in a sty in their gardens he would always be on hand to put them to the knife at the required time.

Fred Cooke bought the 'G. Miles' Butchers Shop at No. 64 High Street in 1947 after being demobbed from Navy, At that time the butchers occupied half of the shop with the other half being the cart shed and entrance to the slaughter house.

Shortly after Fred converted the cart shed and slaughter house entrance into a Wet Fish Shop and both adjacent shops traded until the early sixties.

Fred had started at Hillier's as a delivery boy, and then manager. Eventually he and Lily bought and run the business until 1977 when they sold A F Hillier butchers and retired. (92 High Street was most recently David Gregory Butchers until 2014.)


In 1977 the slaughter house itself, together with the stable at the rear, were converted into a 'Granny flat' within which Fred & Lily lived until they passed on 1988 & 1978 respectively.

Fred's daughter, Gwen Peden and her husband Eddie had lived in the property since returning from Canada in 1962. In 1964 they took over the premises from her father and opened Gwen's Ladies Fashions which traded until December 2012 when Gwen and Eddie retired. They continue to live in the village today.

Gwen and Eddie sold to Clare Southcombe on the 25th February 2016 and soon after the latest refurbishment project began....and now the business 'No64' has been created.

Glenn said; "As far as a history of the building/plot/village goes Gwen & Eddie Peden have been wonderful in providing me with an amazing history."

The new website for No64 is now online for you to take a look: www.no64.co.uk, the shop and services will be opening soon.