You know how some weeks are better than others?

Well, I have just had a mixed one! Having spent the last 10 days trying to finalise the programme for Food Week, and working 5am to 11pm, 7 days a week (yes, seriously!) it has been a mix of highs and lows.

The lows have been chasing people for information, the highs have been the fantastic enthusiastic responses from the wide variety of people who want to be involved, the great number of small local businesses that have shown their support by becoming sponsors, and the excitement of closing deals with an excellent group of top name celebrity chefs and performers happy to come and be part of Milford on Sea Food Week.

Anyway, tonight is Friday and my wife and I have tickets for the Burlesque Cabaret Night in Milford on Sea Community Centre. Naturally, the tickets had been bought because my wife enjoys the variety of costumes and the dances, and I, like most men, was going along just to make her happy. (Do you believe that?)

I have to be honest, although having looked forward to the show for some time (on my wife’s behalf of course), I was seriously considering wimping out for the early night that I desperately needed. My wife decided sleeping is for wimps, so off we went.

On arriving we were greeted by Sue in an outfit matched to theme the evening and Marguerite in an apron with projecting speaking breasts when you squeezed them. (Perhaps you had to be there to appreciate this!)

Things became even more surreal when our local solicitor arrived in fancy dress with a mac and glasses and acting a shady character to match! Added to this, some of the audience where wearing themed costume, and the atmosphere of the purple dressed show hall let you know that everyone was going to be in for a good night.

The table we had consisted of our old friends C&T, plus some new faces from Lymington. We soon introduced  ourselves and went on to have a really fun evening together.

Before the show we were all fed with complete efficiency, and enjoyed a tasty and generous chicken dish with a jacket potato and vegetables. We debated whether it was chicken casserole or coq au vin, but either way it was very enjoyable.

I have to be honest the show kicked off a little slowly, but at that stage we had no idea what was to come! All that were watching the show will remember the 'bleaching' joke after a few minutes, and from that early stage the show grabbed everyone's enthusiasm.

Throughout the evening, like the dancers, the audience lost its inhibitions, and there was more cheering, shouting & whistling than I have seen in any Community Centre show before. As much of this was coming from the women as the men! 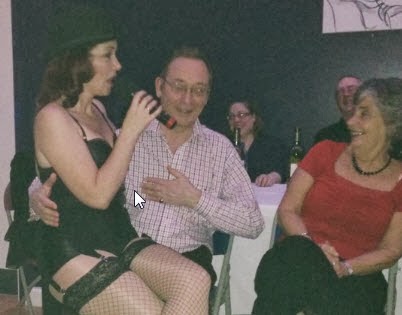 The show was wonderfully compered by 'Miss Annie' who had a great voice and a great disposition for delivering jokes. Her rendition of 'Cabaret' bought the house down, and her song about her cat had all in fits of laughter. She could also put together a really good Burlesque dance. (We were later to discover that she is also the lead singer in The Regular Joes jazz band.)

Alongside her was lead dancer 'Sensu'Elle'. She was statuesque and commanded the stage. Her timing was excellent and she drew the audience right into her dances with her charisma. Added to this, her fan dance was perfectly timed and a delight.

As 'Miss Annie' was conducting the crowd in a singsong of the 'Twelve Days of Christmas' one guy from the audience, who had been good fun all evening, decided that the song was too fast, and then went to the stage and took the microphone from her. He then tried to get the audience singing it acapella. Not a great move to make after a few drinks, and he was soon heckled and shouted down.

What he had not realised was that the song had been purposefully set to make it a quick fun part of the show. Miss Annie resumed the microphone, and every table played their part by taking turns for each verse to stand and sing their lines of ‘Five Gold Rings’, ‘Three French Hens’ or whatever, along with the relevant with actions to match. The crowd joined in with gusto and amidst the laughter everyone was smiling

As the show returned to the running order, we were treated to dances from the 'Swinging Belles', 'Miss Anticipation and 'Baby Belle', who was making her first ever stage appearance.  The range of the dancers abilities added to making the evening feel totally inclusive.

The other striking memory was that all the girls were real shapes and sizes, they had sparkly costumes and were obviously enjoying performing as much as we were enjoying watching. 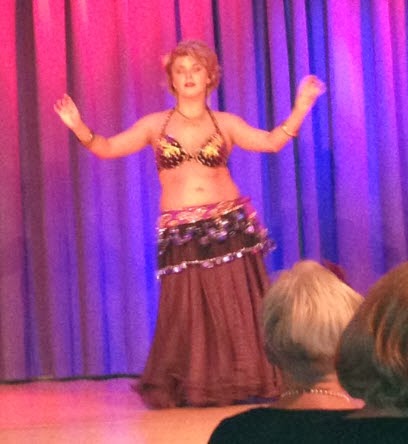 Arguably, the best dance of the night was a 'Belly Dance', having not seen a 'real one' before I was enthralled by the movement and skill that went into making it so sharp and precise. I don't think anyone in the room could remove their eyes from the stage throughout the routine.

The bar was open & well stocked throughout and I made plenty of visits to ensure that the team serving were kept fully active.

Miss Annie closed the show by asking if we wanted to 'see her privates', at which time the full cast arrived wearing army uniforms. They all sat on the front of the stage and performed a complex 'white gloved hand dance', which was as funny as it was entertaining.

The last routine summed up the night, it was innocently naughty in places, it was funny, it had some great dancing and the singing was excellent. Ultimately, it was great fun for everyone that came along.

As I awoke the next morning my head was thumping and legs not quite working properly. That settles it, it must have been coq au vin, wine always gives me a hangover!