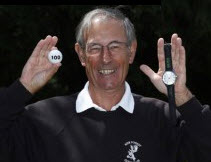 Golf Monthly carried a recent story telling that Milford on Sea golfer Alan Clark, 71, has received a limited-edition BOSS watch after scoring a hole-in-one during a recent competition at his club.
His ace was scored on the 140-yard, par-three 11th, at the New Forest Golf Club, when Alan is also a committee member in its 125th anniversary this year.
Alan, a 18-handicapper was rewarded with membership of the exclusive BOSS Watches H1 Club and a specially-commissioned, commemorative BOSS watch.
Clark, said to golf monthly: "I had just messed up the previous hole, a par-five, where I took a nine - so with a one on the 11th I'd played the two holes to my handicap. "Normally you'd do it six and four but the nine and one had the same effect," he laughed.
The luxury German brand, BOSS Watches, has pledged to reward club golfers with an exclusive watch for every hole-in-one recorded during a club competition between April 15 and October 31 this year. And, with nearly 4,000 holes-in-one recorded annually, BOSS Watches could feasibly be giving away £1m-worth in 2013.