The Community First Responders work for the South Central Ambulance Service and get deployed to appropriate emergency calls in the village. All are volunteers who donate their time and expertise for free. The group has been founded by Ross Woolgar, Terri Newton and Conrad Curtis.

The advantage of Community First Responders is that in many cases they can get there before the paramedics and commence life saving emergency treatment at the earliest opportunity, which significantly improves patients chances of survival. 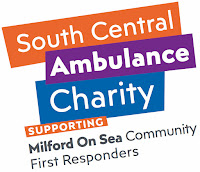 The volunteer Community First Responders have been trained by the South Central Ambulance Service in basic lifesaving skills and operation of emergency equipment. They are not paramedics. People should just call 999 in an emergency as they normally would and the control room will make the decision whether to deploy our Community Responders and, if so, page or call they.

The lifesaving kit they carry is rather expensive and because of this can't be funded by South Central Ambulance Service so, currently, the three medics are sharing one set of kit which has kindly been lent to them by the Ringwood Community First Responder team. The objective is of course, for each first responder to have their own kit.

The Milford on Sea teams first priority therefore, is to raise enough cash, somewhere between £5k to £10k initially, to fund their own kit to make sure they are able to help everyone in the village if ever needed. 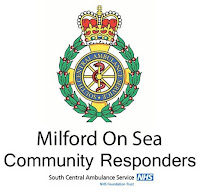 Milford on Sea Community Responders will be planning fund raising events to do this but they are going to need some help from the community for what we hope everyone would agree is a very worthwhile cause.

Better still would be if anyone is generous enough to make a donation, the sooner the money is raised, the sooner a full service will be available. To donate please click here.

To kick things off, Food Week have just donated £500, and hopefully the target will be hit soon - Personally I also hope I never see Ross, Terri or Conrad coming round my house with their shiny new kit!

We can already report an operational success story. A Community First Responder was recently called to an incident at Keyhaven Yacht Club where a gentleman had collapsed with breathing difficulties. The CFR was able to start early treatment ahead of the arrival of an ambulance crew. The result was a good outcome for the gentleman involved and demonstrates the worth of having community based First Responders.

Every little you could contribute would help - To donate please click here.