Splashing Around in The Solent 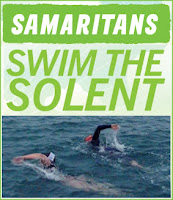 This July, Joey Owen, local Milford on Sea villager and leader of MiCO (Milford Community Organisation), is taking part in 'Swim the Solent'.
My own training is also underway.
Swim the Solent will place on Sunday July 21st 2013 starting from Hurst Castle on the mainland at 9.40 am.
Joey is determined to raise as much as she can for the Samaritans even though as she puts it; 'It is quite a task because the sea is freezing and the tides are strong!'
Joey and fellow swimmers have been training all winter, bravely wearing swimming costumes in the waters at Milford on Sea beach. She is hoping that plenty of people sponsor her, so that she doesn't 'chicken out at the last moment.......'
The Samaritans provide such an important service on the island and this is their main fundraiser of the year, so every penny means an awful lot to them and their dedicated work.
As I mentioned, I am also in training for the same event.  The full body waxing took some doing, and whilst my 1985 Speedo's are a bit tight, I am willing to take the pain for a good cause.
Call me old fashioned, but there is something pleasurable about covering yourself head to toe in lard before wandering down to the seafront for training.
My wife refuses to help apply the lard, murmouring something about an 'oversize turkey'. She did however buy me a sea blue swim hat, to replace the bright yellow one I had for safety purposes. Apparently, the new colour 'suits me better', but I suspect her motive is more connected to the hope that I get separated from my safety boat.
When I arrive for training on the beach, many people pretend to ignore me and then whisper as I pass, I am pretty sure that this tells me I must cut an impressive figure.
So far I have been unable to train with my fellow event swimmer, sadly they are unavailable at any time I suggest, and a few seem to have changed their telephone numbers. It is a shame, as I would like to show them my 'Swimmer of the Year' trophy from 1968.
The organisers have recently asked me if I am happy to swim in the opposite direction and possibly on another day. My wife thinks this is a good idea, and that I should increase my challenge by doing it at a time when the shipping movements are busiest.
---------------------------------------------------------------------
If you would like to sponsor Joey, you will find her JustGiving page here:
www.justgiving.com/joanna-owen3
---------------------------------------------------------------------
Swim the Solent for Isle of Wight Samaritans began in 2007 when the director of Isle of Wight Samaritans at that time, swam from the island to Hurst Castle on the mainland and raised £3,500 in sponsorship for IW Samaritans. It has now become an annual event.
The swim date is when the tides are most favourable nearest to that day, and it takes place in the morning when there is least traffic on the Solent. The distance is a mile and a quarter, so swimmers must be fit and able to swim that distance in not a great deal more than an hour.
The two Freshwater Lifeboats and some Ribs (Rigid Inflatable Boats) accompany the swimmers, and there are also kayaks to guide the swimmers who are paired up according to how long it takes them to swim the distance in the pool, 90 lengths of a 25 metre pool. The Lifeboats and Ribs take swimmers over from Yarmouth and drop them in at Hurst and they swim from there.
For Isle of Wight Samaritans the money raised is absolutely vital, it is half of thierr income and enables them to keep the centre running and phone lines open.
Isle of White Samaritans: www.iwsamaritans.org.uk