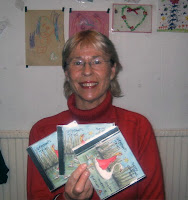 Local storytelling grandma Wend Lewis needs your help. She has some remaining copies of her charitable CD for children and wants to reach her target of raising £2000 for Naomi House children’s hospice.

Wend Lewis, who lives in Keyhaven, has already raised over £1800 for the charity, way over her original target, through her CD of stories and poems based around traditional nursery rhymes, called Grandma’s Tricks.

Wend got the idea for the project from telling stories to her grandchildren, Maia, 8, and twins Darcey and Skye, 5.

She financed and worked on the CD herself, narrating and adapting the stories and adding some fun and humour to old favourites such as Jack and the Beanstalk, Humpty Dumpty and The Three Little Piggies.

Local musician and retired solicitor Nick Filbee helped with the project by providing the musical accompaniment and Karin Karian of Vocal Solutions assisted with the production.

Wend, a keen singer and music lover, believes that nursery rhymes and traditional stories still have a role to play in this digital age.

Grandma’s Tricks is being sold for £10 a copy, with all proceeds going to Naomi House.