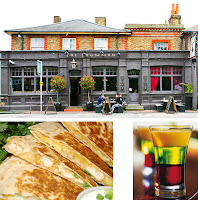 No. 1:  This was not supposed to be the first meal in our culinary 40 B4 40 challenge, we has simply gone for a belated 40th birthday drink with my brother in law.

Arriving at The Drummond in Guildford at 5pm were around ten mutual friends, and the beers soon started flowing.
As the evening drew on, a traditional Friday night curry was looking on the cards.  But then, to my utter surprise, someone suggested we eat in the pub.  The menu was quite a surprise and the choice extensive.  We all placed our orders, and a lot of the guys went for deep fried whitebait with tartare sauce & lemon, followed by minute steak, garnish and fries.  My wife and I plumped for a quesadilla (Mexican flour tortilla folded and filled with a savoury mixture containing cheese, red onion, peppers & tomato with a delicious spicy cheese dipping sauce), followed homemade breaded hake fish fingers, crushed minted peas & fries.  The quality was great and everyone happy with their choices, at £8.50 for two courses the value was both a surprise and excellent.
During the meal my brother in law continued to insist that his girlfriend (who none of us had met) was coming to join us, however she had been delayed doing something called ‘work’ in London.  7pm came, then 8pm, with various reasons being given for the extending time of the impending arrival.  Being a sensitive group it did not take long for us to mercifully rib him about his ‘imaginary girlfriend’.  As the drinking continued, a phone call arrived saying she was arriving at Guildford station.  Having had more pints than is good for us, we decided on a nightcap at a bar called Tickled Ivory.
My brother in law went on first to meet ‘his girlfriend’.  We followed, about a pint later.  On arriving at the bar we found him talking to a nice looking lady.  As we all got the drinks in, my wife ordered her favourite ‘squashed frog’ shot (Advocaat, Midori melon liqueur & Grenadine).  The place was buzzing, and so were my ear drums.  The music was loud, very loud, but my wife was soon chatting away, I was convinced neither of them could hear each other.  Soon I was introduced, and I asked if she actually knew my brother in law, or was she just chatting to him out of sympathy?  I could not hear her replies, all I could see was her mouth moving and a strange look on her face like ‘who is this weirdo’.  So, it still remains to be seen whether I have actually met his girlfriend, or whether it was a random good Samaritan digging him out of an ‘imaginary girlfriend’ hole.
www.thedrummondguildford.co.uk
www.tickledivory.com

If you are wondering what the 40 B4 40 Dining Challenge is all about, please click here and all will be explained.